On Saturday I want hiking with my daughter Rebecca at Raven Cliff Falls (in the Mark Trail Wilderness).  It's a little bit north of Cleveland Georgia, fairly easy to get to.  It is one of my favorite hikes and we usually do it at least once a year. 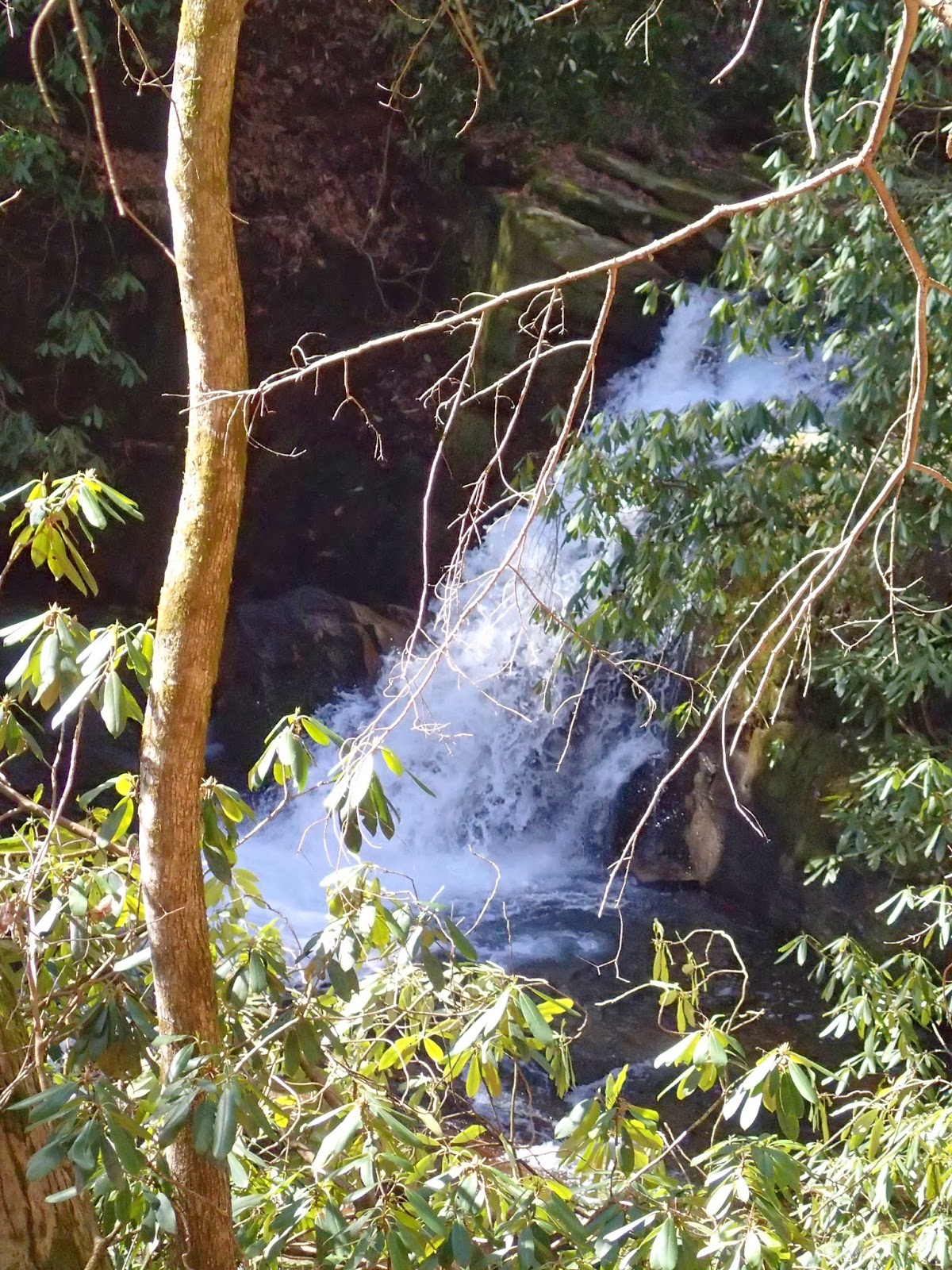 The trail is about 2.5 miles to get to the main falls.  There are several moderate sized falls and peaceful shoals as you hike along the creek.  The trail is in good shape, with a few small water crossings, roots and rocks.  There are a few short steep sections, but you get a good stretch of flat path after them to recover.

You can access the creek and it's falls easily all along the hike, which can be rare anymore. 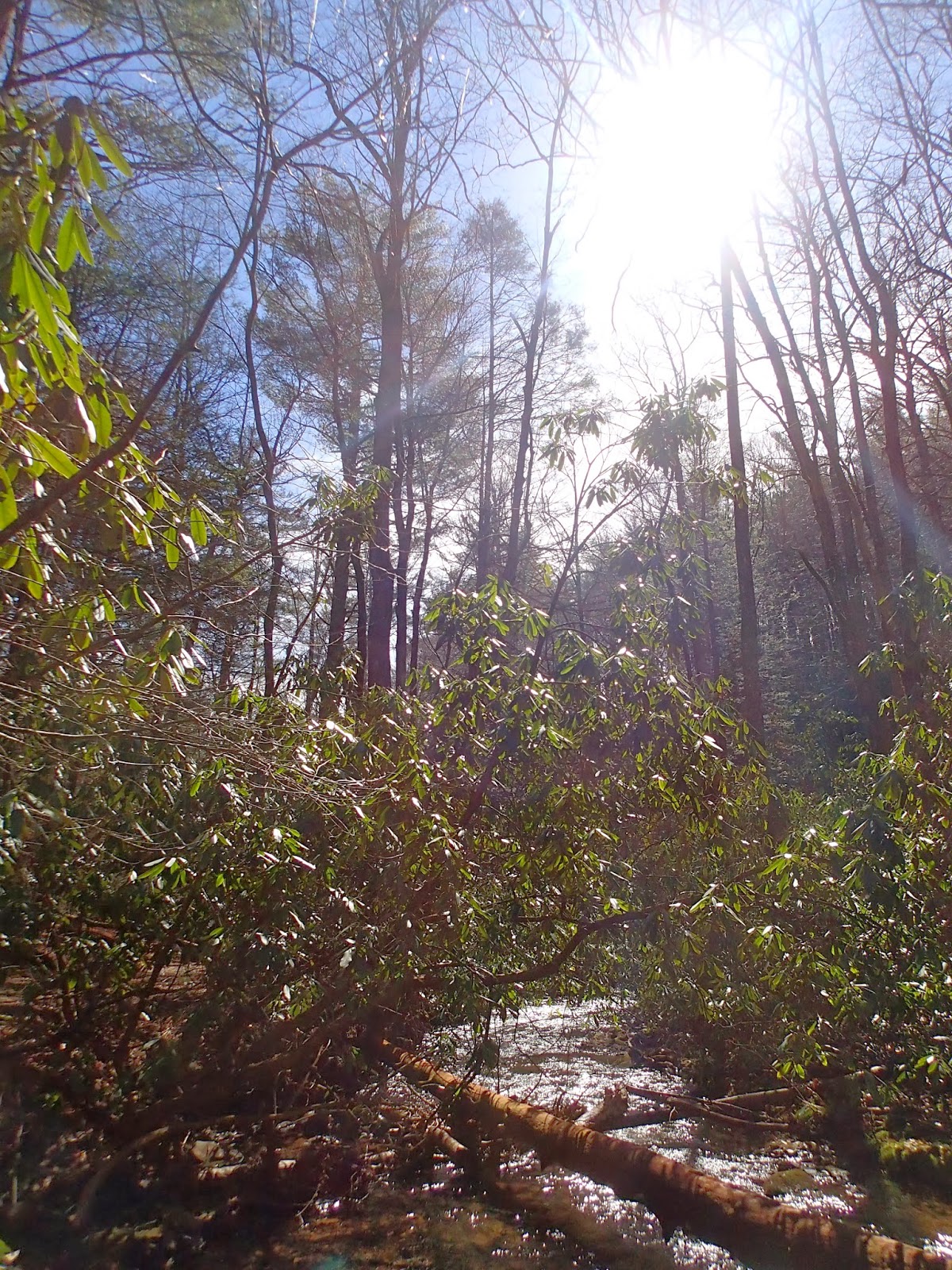 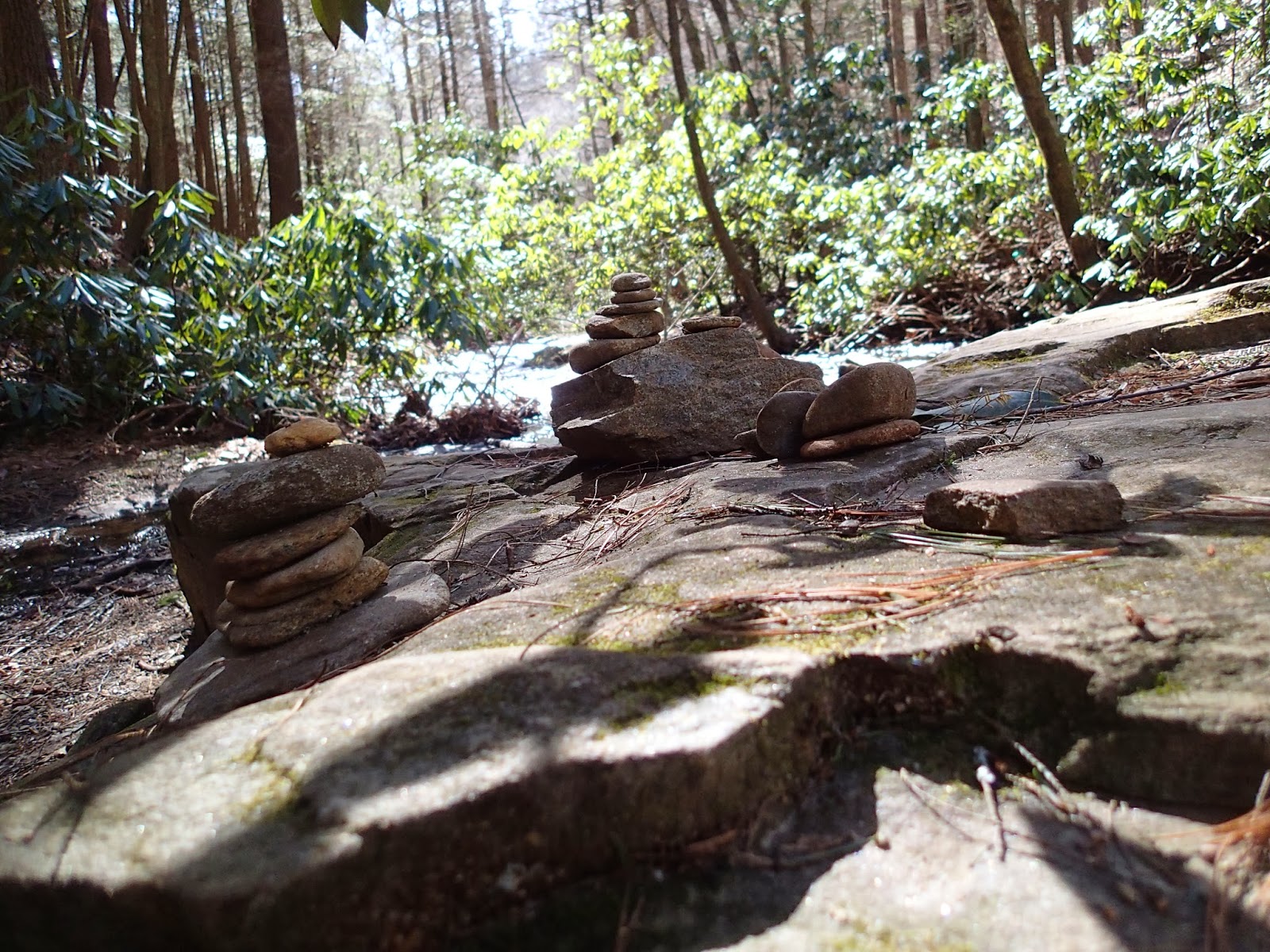 The main falls flow through a split down a 60 foot granite cliff.  It is an impressive sight that itself is worth the trip.

But there is more there if you are feeling a little adventurous.  Running along the cliff is a rock field you can climb up.  (These next pictures are all looking up at a 45 degree angle.) 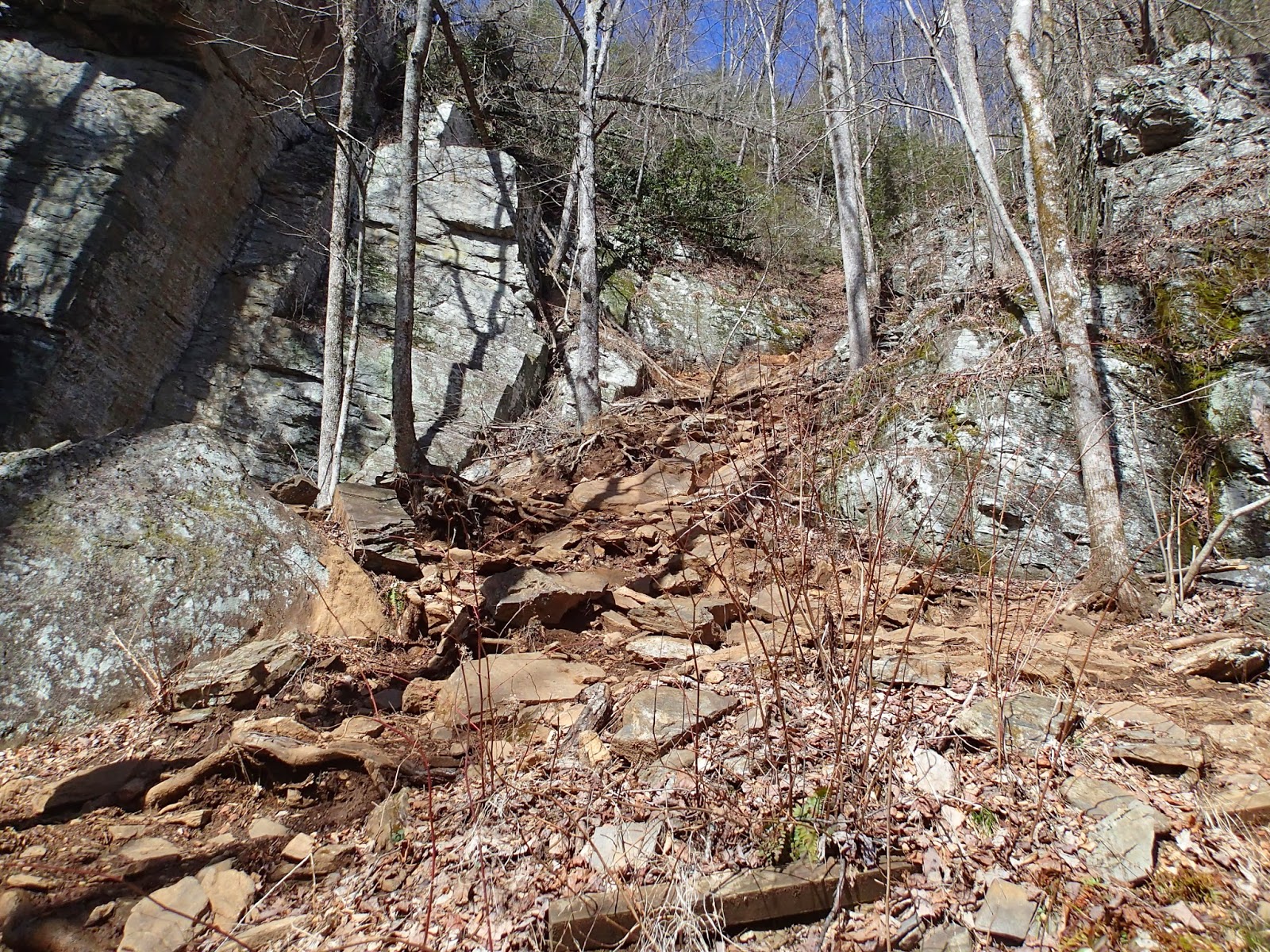 If you climb up the rock field you will find a path through another crack in the cliff face. 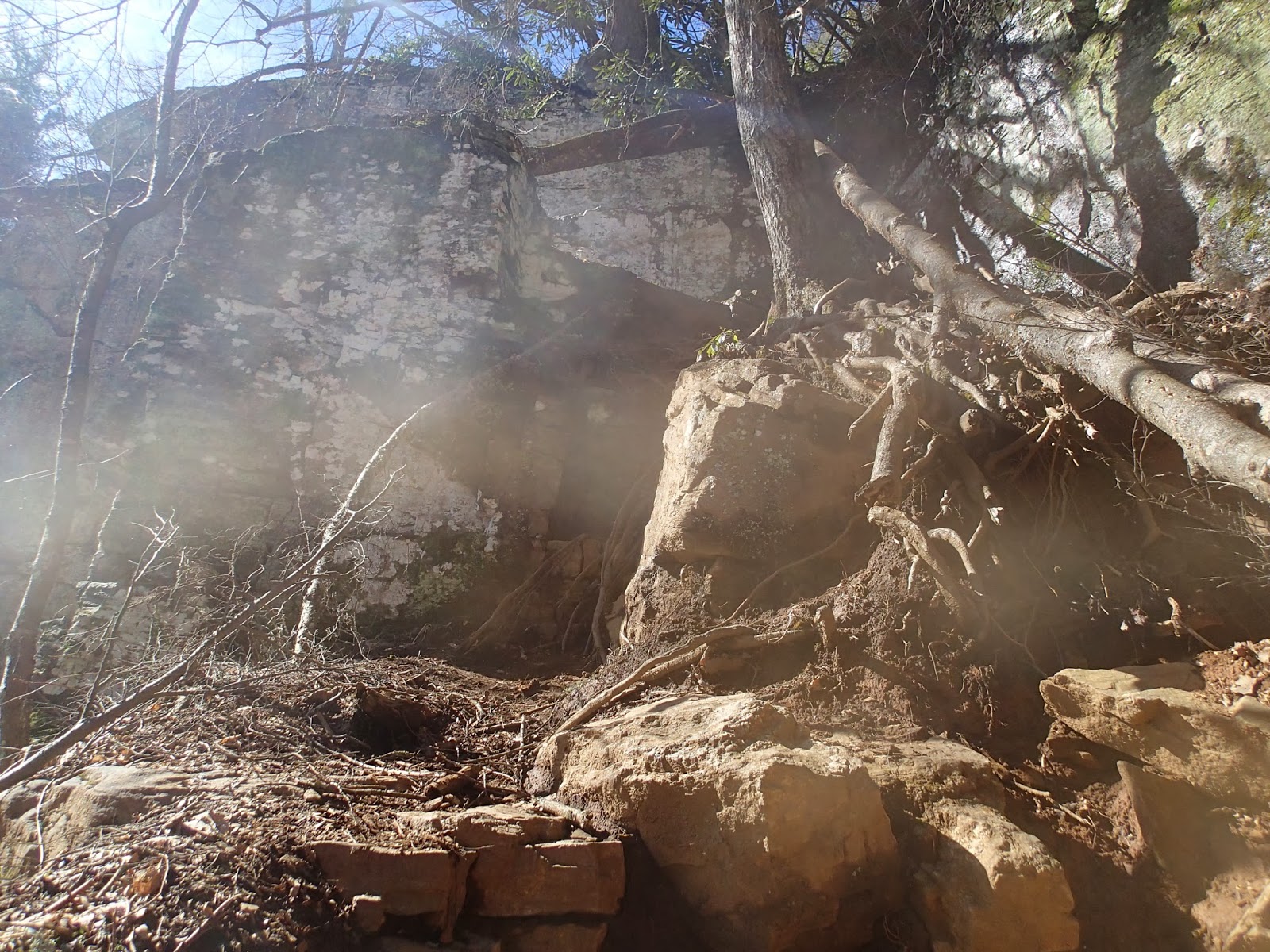 The top half of the path changes from stone to exposed roots. 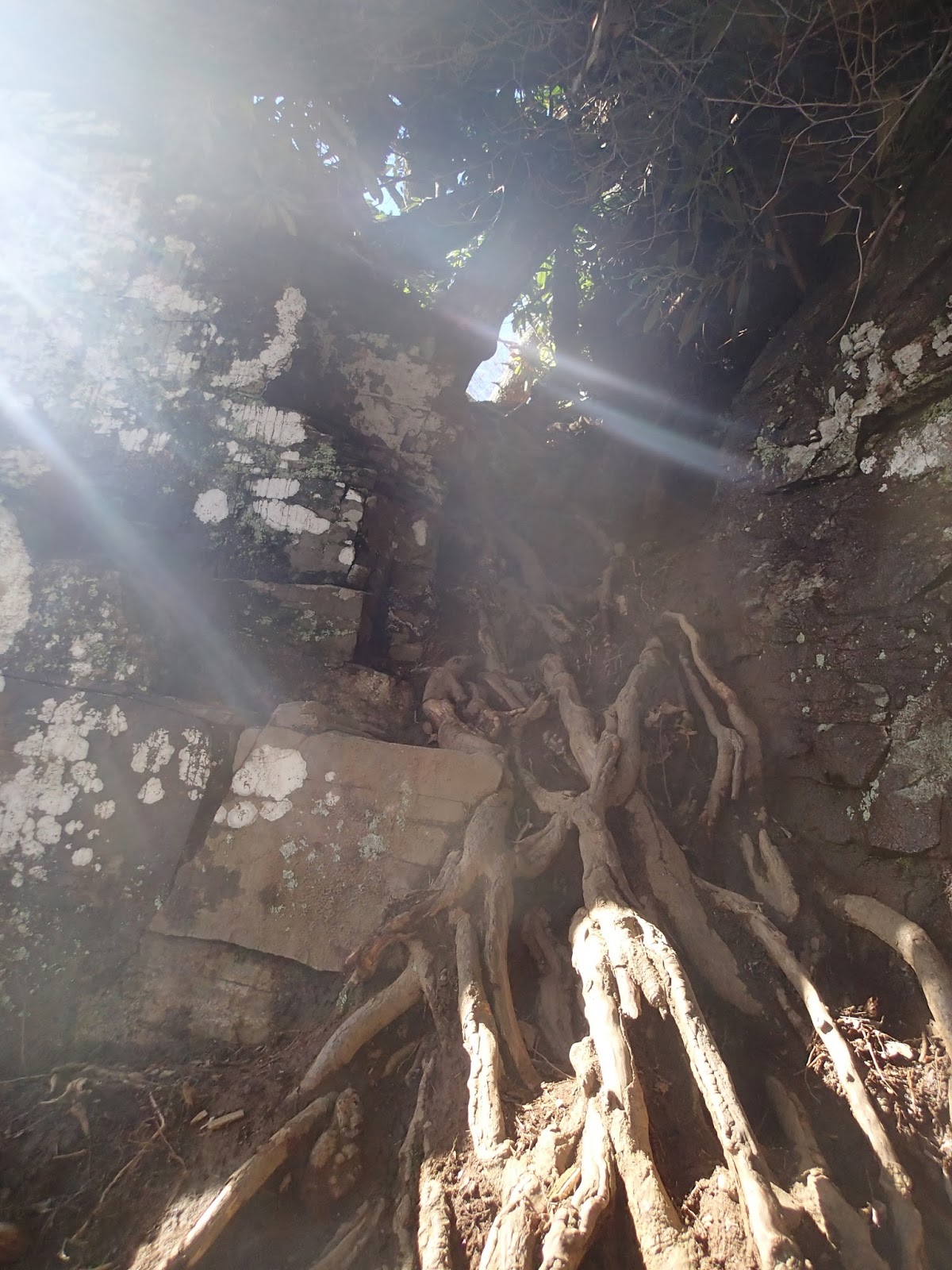 It is an easier climb that it looks, and any active hiker should not be afraid to try it.  (I am not a trainer or an expert.  Please use your own best judgment if choosing to do this.)  If you do go up you will get somewhere that not everybody does. 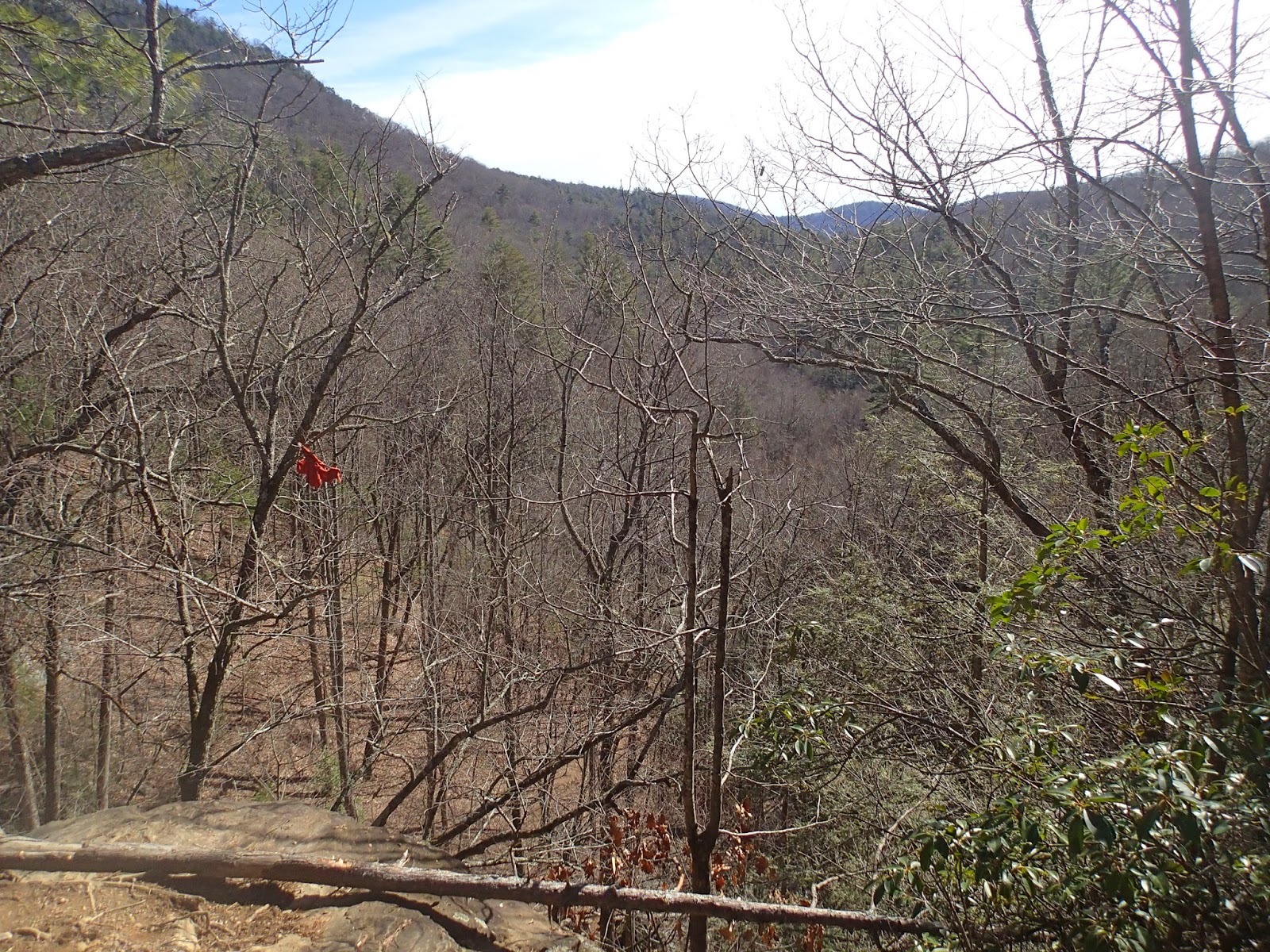 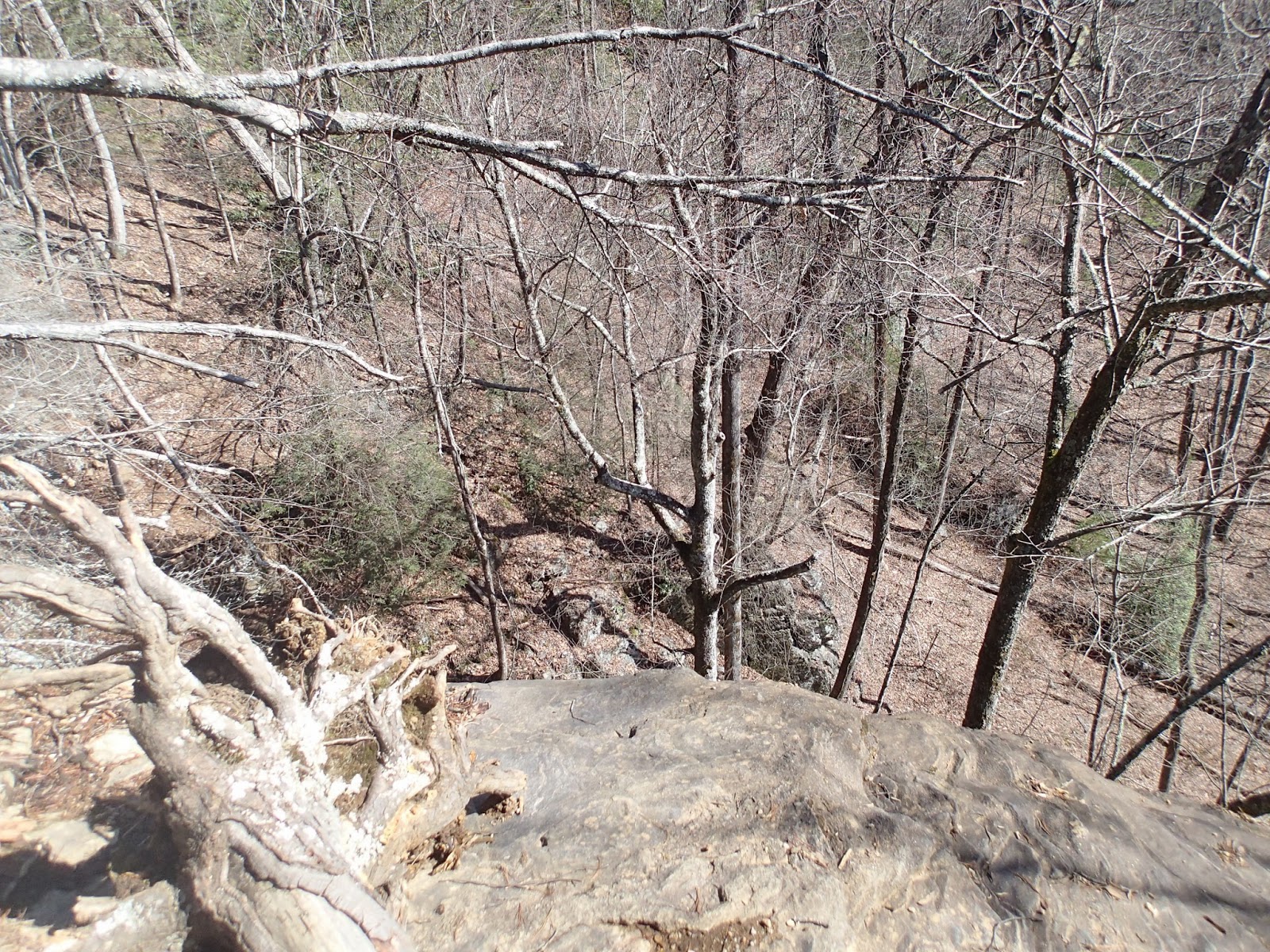 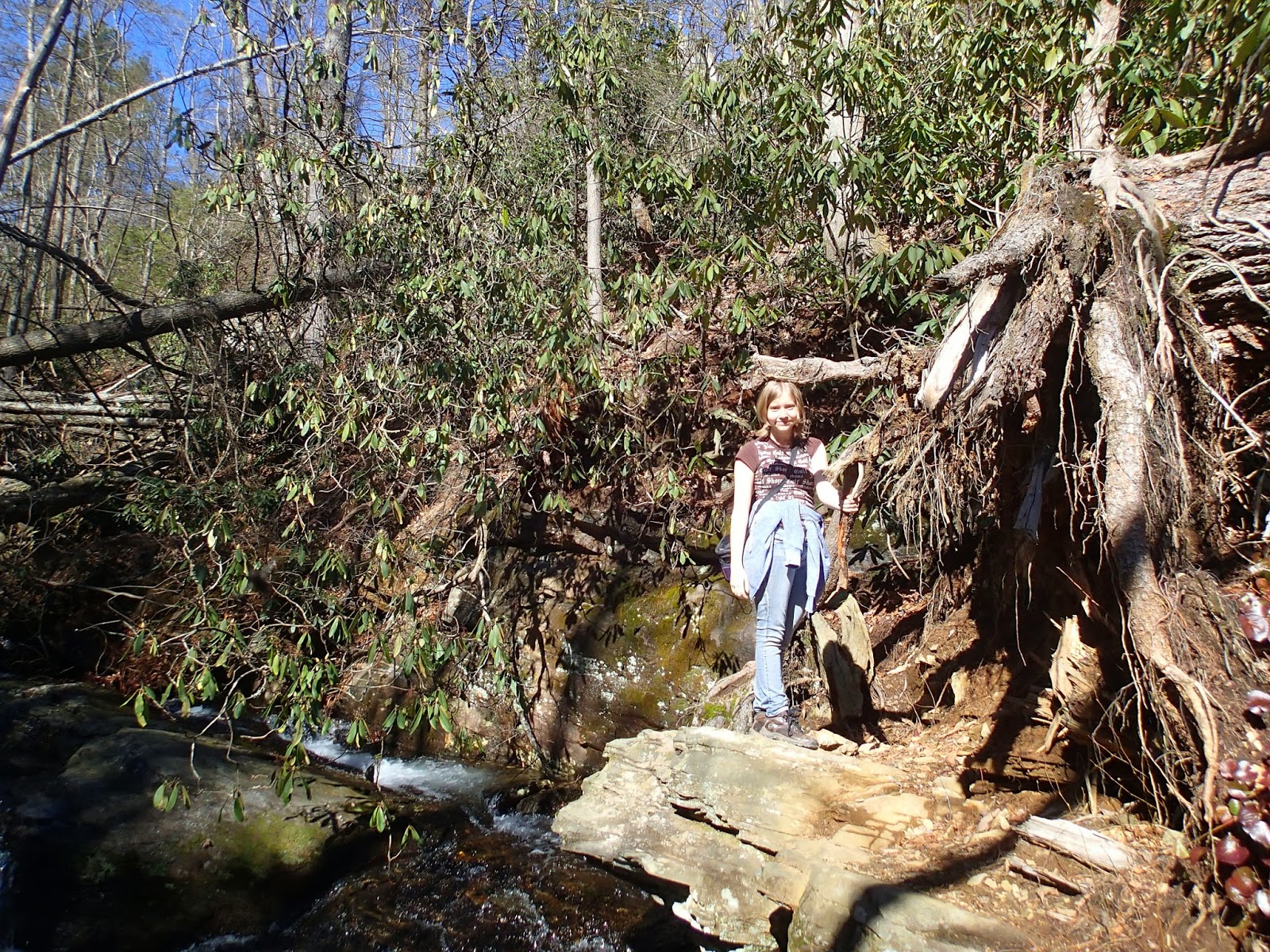 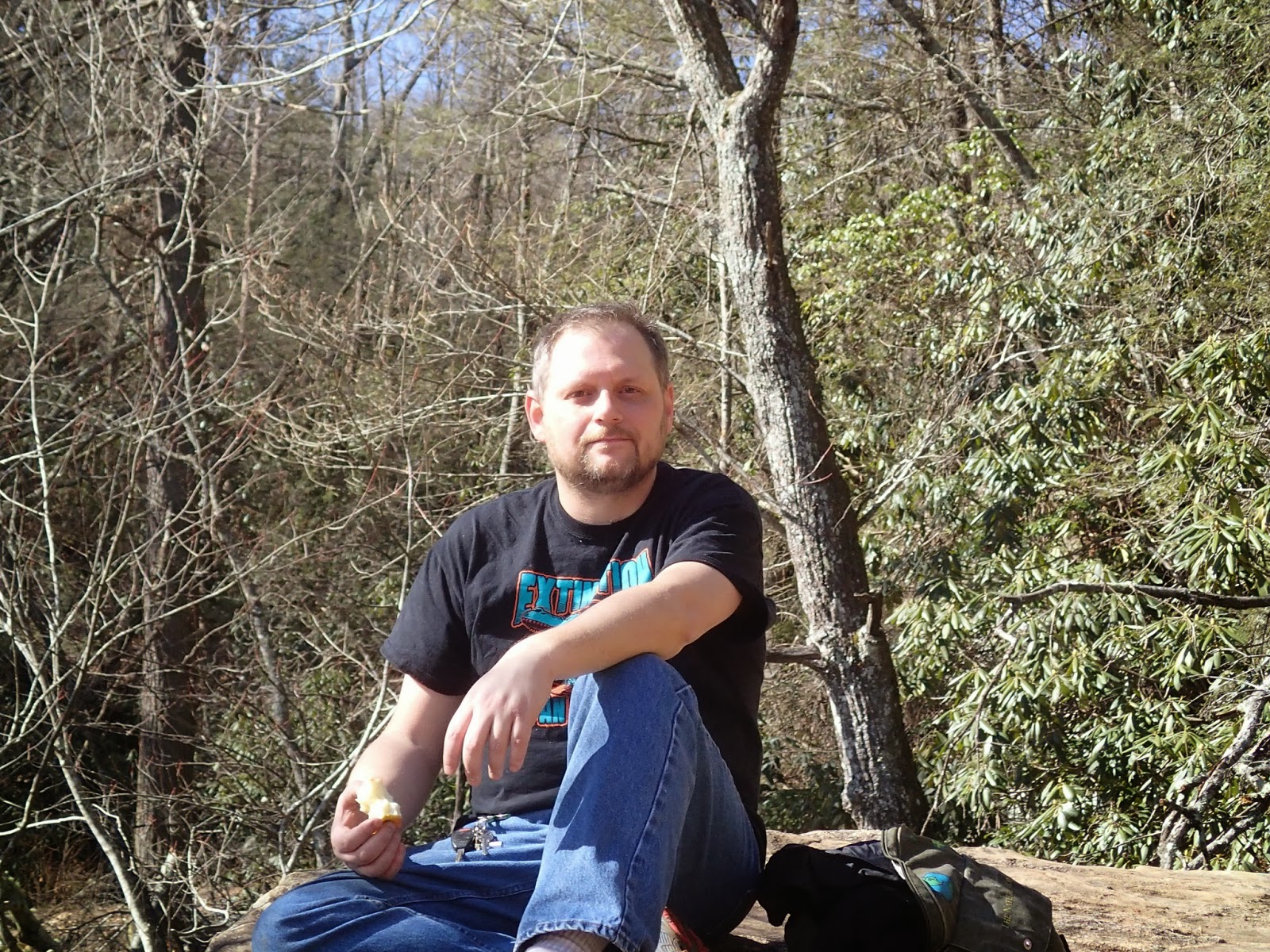 I only look moderately grumpy in that last pic.

Bonus Track:
Today's bonus track is a sad one.  There is a lot of upheaval in the world right now.  Syria is still a shambles, Venezuela is collapsing under popular protests, Egypt is still not quite right.  Finally, Kiev in the Ukraine is literally on fire.  Here is a picture someone put together showing a before and after.

There is so much going on in the world.  If you don't know about these things then please, please, please go look them up.  I think that everyone should at least be informed about them.

Over the weekend I went on a quick hike at Sawnee Mountain Preserve, a local nature park here.  It's close and I can get a quick hour hike in.  At the top of the mountain is a rock outcropping called Indian Seats. 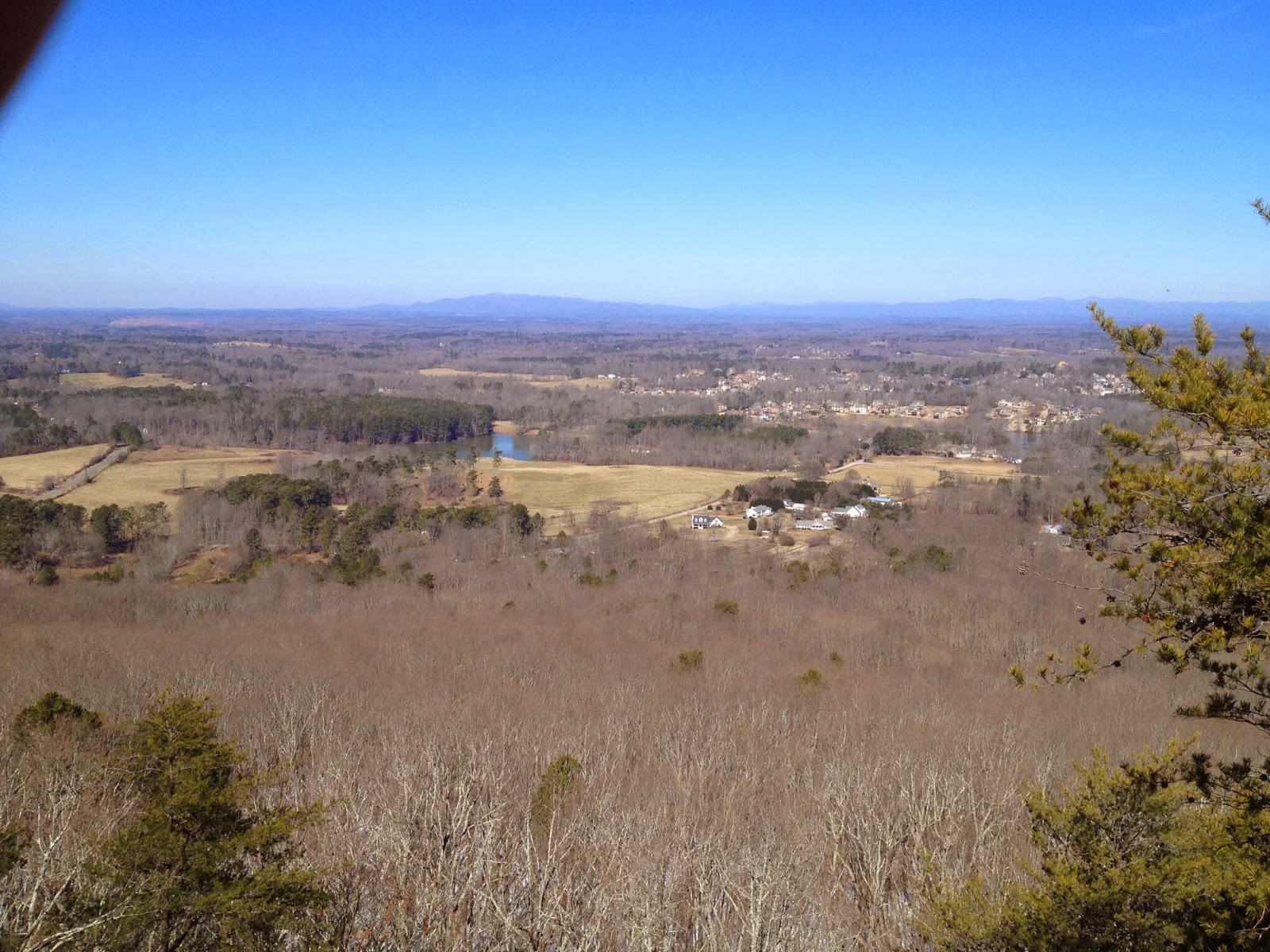 You Can See My House From Here (Well, One I Used To Own)

While I was up there I figured I'd take a selfie with the view in the background.  I'm allowing myself to be inspired by a friend of mine, Brett Haddock, who declared 2014 the Year of Awesome Selfies for himself.  Here is how mine turned out. 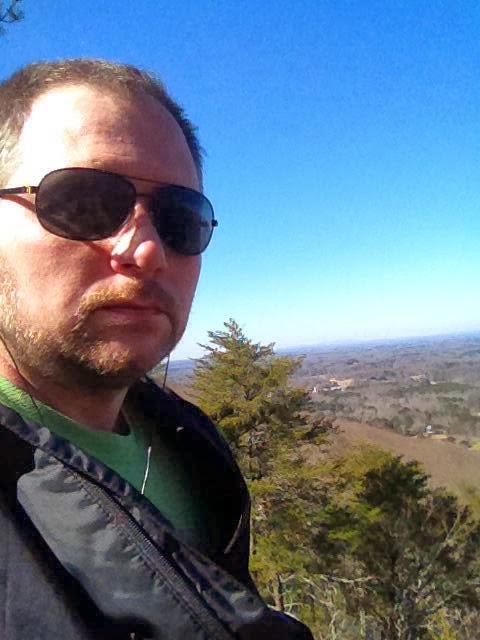 I Am So Happy To Be Here

Believe it or not, that is my neutral, placid face.  I am actually in a pretty good mood in that picture.  My face is not just that expressive, it does not change much with my emotions.  Unless I'm really juiced (happy or sad) I tend to just look a little grumpy.  I have learned over the years to force my face to be more expressive, but I have to be conscious about it.  (Plus it still looks a little fake.)

I am the poster child for "don't judge a book by its cover".  Even so, I still fall into that trap more times than I should.  I'm going to keep that picture handy as a reminder.

I've started taking the last paragraph of my posts to highlight someone or something I've come across in my file that has made it more interesting.  Today, since I mentioned Brett Haddock in the post, I'm highlighting something cool he is doing.  Brett has a parody account on twitter - @nsa_pr.  He can be funny, snarky and sometimes crude pretending to speak for the NSA.  More importantly, he is lending his voice to the very important discussion about freedom, privacy and security that is long overdue in this country.

On the positive side, we handled it better this time.

Just two weeks after an admittedly small ice and snow storm stranded thousands of motorists and shut down the city for days, another bigger storm comes and shuts us down again.  A big difference between then and now?  Earlier warning and better preparation.

The weather forecasts several days ahead of the storm clearly pointed to some kind of storm coming this week.  Exactly how bad, or exactly when shifted a little, but it was clear that it was coming.  Because of this (and because of the disaster that happened last time) the schools and local governments reacted early and "pre-closed" the state.  Instead of the mass of parents rushing home to meet their kids busses at the same time as masses of busses hit the road, everywhere the roads were ghostly quiet, like a winter version of the Walking Dead.

The roads were still bad, worse than a couple of weeks ago.  And worse still, hundreds of Georgians lost power in the depths of the cold.  (It is worth noting that North Carolina and Virginia are dealing with this now, and the rest of the Atlantic coast tonight.  Stay warm folks.)  Some areas in east Georgia got a half inch or more of ice.  ICE.  I experienced ice that bad before.  It is surreal seeing pine needles coated with ice as thick as your fingers.

As Phil Plait (The Bad Astronomer) points out, this storm neither proves nor disproves climate change.  What I can say is this is the third winter event in Atlanta this season.  (See today's Bonus Track.)  Only a few years ago we had a drought that gave us the first real chance of actually running out of drinking water.  When I first moved to Georgia in 1987, this kind of weather was a once every few years event.  Weather in Atlanta now bears little resemblance to what it was back then.  Even still this is not enough to prove or disprove anything by itself.  I will gladly add it to the pile of evidence though.

Today's bonus track comes from Phil Plait, the Bad Astronomer.  Among other things he blogs about Astronomy, Science and other things at Slate.  One of his recent posts was about this storm:

In case you are one of the very few people reading this who does not know who Phil Plait is, here are some reasons why you should read his work:

My family and I have had the pleasure of spending time with Phil and his family.  They attract other good people to them and I can say that they are the kind of people I want around me.

This winter has been one of extremes.  Here in Atlanta we've had highs of 70+ degrees and highs of 16 degrees. Topping of this winter (hopefully) was the two inches of snow that brought Atlanta to a halt.

There is a saying, "it's not heat, it's the humidity".  Living in Atlanta, I can vouch for this saying.  In the same vein, "it's not the snow, it's the ice".

I grew up in northern Indiana.  A place that expects and knows how to deal with snow.  I understand how people in northern states look down on us living in the south when we "overreact" to even the slightest snow buildup.  While I cannot deny that the Atlanta area could do a better job dealing with winter weather, there are some good reasons we don't:

But, more than that, is the ice.  For whatever geographic / weather reasons any true winter precipitation results in at least some icing on the roads.  Sometimes a lot.  Last week's snow left both streets in my neighborhood plus the main road iced completely over for a day and a half.  The ice did not completely go until several days later.

It is the ice, even risk of ice, that shuts Atlanta down.  For good reasons, mind you, driving on ice is truly dangerous.  Normally, Atlanta shuts down early, just in case.  This time was different.  Schools met in the morning, as normal.  People went to work, as normal.  Then, all at once, every school system announced they were closing early.  Parents had less than a half hour notice that their kids would be at their doorsteps waiting, whether the parents were there or not.

So, in the space of half an hour, the entire city of Atlanta and the 13 county metro area got in their cars and headed home.  On ice.  With poor visibility.  Disaster.

On a nicer note, here is a picture of my dogs frolicking in the snow. 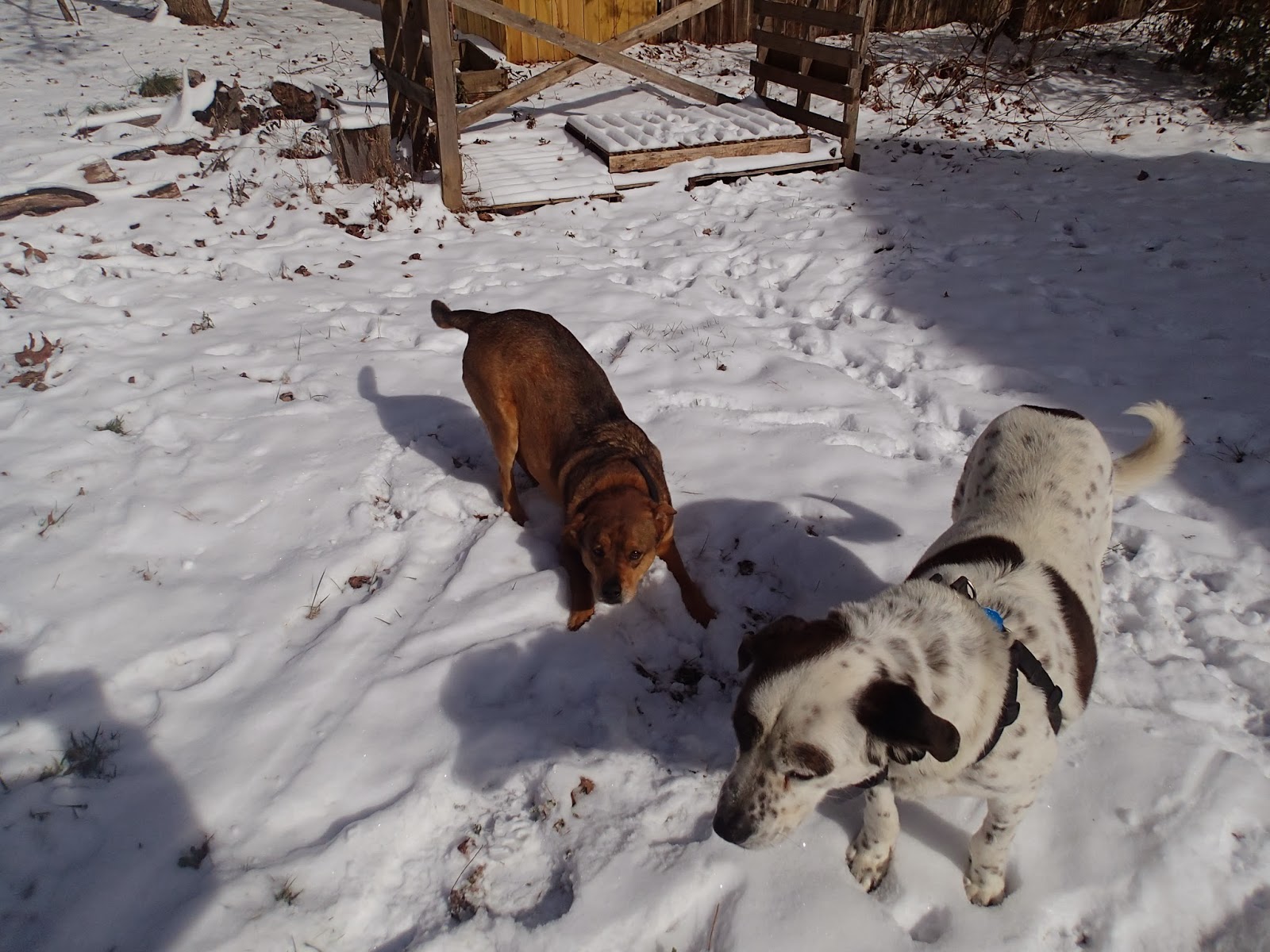 I have a friend who is a photographer.

Actually, I have several friends who are photographers.  Once couple, both with cameras, just had a baby.  My Facebook feed runneth over with cute baby pictures.  But I digress.

My friend Jason Bechtel, an excellent photographer, recently went to Jackson, WY.  He took many great pictures of winter wonder.  It reminded me of the trip my family took a few years ago.  Jackson in the winter is a place you should visit.

Jason blogged a bunch of pictures at his tumbler.  Go have a look.
http://chargingskies.tumblr.com/