This is another post in a long line chronicling my trips to Utah this spring.

You've done this before.  A lot.  Nothing should be different this time than it was the dozen times previous.

In a previous post I talked about breaking my Jeep in the mud of Grafton Mesa.  The mud also makes it a hard place to camp.  The first night we pulled into camp it was already dark and we were tired.  We threw down a tarp then threw up the tent on one end of it.  My tent is super easy to set up.  You literally take it out of its bag and let it go.  The spiral rods open up and presto, tent.  There are three bows that can be put in to stiffen the structure and stretch things out, but the tent stays up on its own.  I opted to not install the extra bows in the dark and we bedded down for the night.  The next morning everything seemed fine.  The clear sky brightened our spirits as we got ready to head down the mesa for the day. 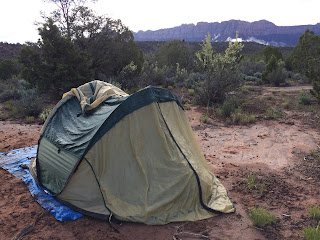 Here is where I made my first (and possibly second) mistake.  The first mistake was to not install the extra bows no that it was light.  This puts the rain tarp entirely in contact with the tent that exacerbated problems that night.  Another possible mistake was to leave the camp set up in the first place.  If we didn't have to go back up to our camp site we might have found another one in better conditions or the second night.  But I won't beat myself up over that one.

That night, as we pulled into camp in a light rain, we looked forward to a dry tent.  That isn't what we got, however.  By age and not being fully assembled, the tent gave up keeping water out and was sweating on the inside.  Some water pooled near the entrance flap.  The tarp we put down to separate the mud from the tent seemed to pool water under it, making the problem worse.  After trying to mitigate things as best we could, we abandoned the tent and made space in the jeep for the night.  We were grumpy but made the best of a bad situation.

The next day was clear and beautiful again.  We packed up camp, trying our best to separate the the muddy from the clean and made our way out.  (As you know from the previous post, we didn't make it out.  Oh well.)